iOS Memory Footprint can be measured by Xcode Memory gauge and can be investigated by Instruments.

Xcode memory gauge is used to view the memory footprint of the app. It is present in Xcode debug navigator.

Instruments provides number of ways to investigate the memory footprint of the app.

Allocations check the various heap allocations of the app

Leaks provides the memory leaks in the process over time

VM Tracker provides the memory allocation information in Dirty size, Swapped (Pre-Compressed) size and Resident size. It is useful to identify the dirty size of the app

Once EXC_RESOURCE_EXCEPTION exception occurs the memory allocation can be view from the Memory debugger. Memory Graph Hierarchy can be viewed from the debugger. 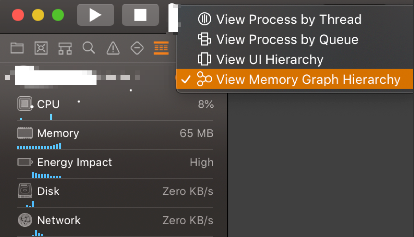 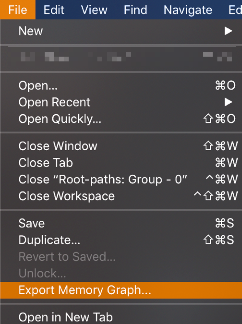 Once abc.memgraph is exported. We can investigate it further using XCode command line tools such as vmmap, leaks, heaps, malloc-history.

Shows objects that are allocated, but no longer referenced and also shows routine cycle to which the leaks belong to. Tracks objects in heap that are not rooted in runtime. So Leaks are dirty memory that can never be freed.

Shows object allocated on the process heap and used for identifying large objects in memory and what allocated it.

To use malloc_history command line tool, malloc stack tracking should be enabled.

From the backtrace, the function/class which causes the huge memory allocation can be identified and managed better.